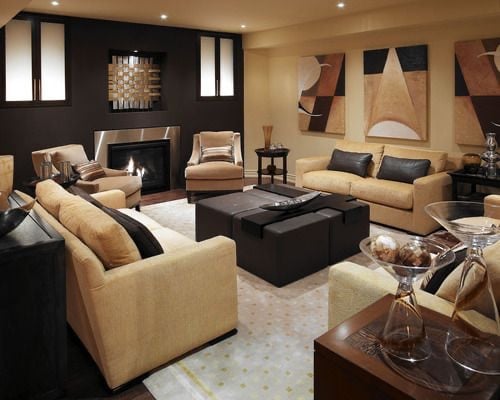 We are discussing furniture and home pieces.

Tokunbo says she’s a sucker for Victorian-styled home decors. Eddie tells her to cut her taste according to her pocket. Tokunbo takes offence and informs Eddie that she can afford whatever type of decor she wants and all she needs to do is to call one of the men on her contacts. A knowing smile creases across Mallam Hassan’s face. Eddie clears his throat mischievously. Only Mr. Cele seems to be lost on the joke. He’s a middle-aged man with family problems and church commitments, so he doesn’t get subtle jokes like this.

Speaking of home decors, did you know that your interior decoration says a lot about you? No? Well, you do now. Anyway, I chip this into the conversation. Mallam seems interested. Tokunboh asks me to explain how this is. Eddie, who is on his second glass of Bourbon, is sitting attentively, his budding potbelly poking out in front of him.

I explain that for example, having a lot of extra seats scattered around your apartment shows that you’re very interested in socialization and you’re often having people around you at home. Mallam Hassan says that sounded like him. Eddie says that even though he’s a social person, he has stopped having many chairs around because of friends who never know the right time to start going home when he has a woman over. Tokunbo gives him the side-eyes.

I also explain that having a decluttered table, cabinet or even living room may mean that you’re not only tidy but the sort of person to choose aesthetics over functionality. Tokunbo admits to being this sort of person. She says that in fact, no matter how important a fixture might be in her house, if that fixture doesn’t satisfy her aesthetic taste then she’ll end up getting rid of it. Eddie asks her why she has not gotten rid of the ugly men she sometimes hangs around with then. I almost choke on my drink.

Tokunbo ignores Eddie’s trolling and asks me about colours. I tell her that people who prefer to have brightly coloured interiors such as yellow and orange are typically very optimistic people who always have a positive outlook towards life.

I also explain that people who prefer warmer colours such as grey and warm brown are often less optimistic and more cynical. Tokunbo says no wonder. I ask no wonder what. She says that the walls of Mr. Cele’s house are warm and gloomy, and that’s why he’s never fun at parties. Mallam Hassan lets out a loud howl.

Mr. Cele grunts about how we should have seen him in his younger days when he used to be the life of the party. Everyone says they can’t imagine Mr. Cele being fun at any point of his life.

Then I tell them about furnishings and people who typically prefer softer furnishing (…perhaps with a mix of vintage utensils like lamps, your mum’s teacup and old Arabian rug). I tell them that such people are typically very traditional and very family-oriented.

Mallam Hassan remarks that he is a combination of the family-oriented and the very accomodating person. He says he typically goes for soft furniture and his home is littered with seats made available to the many guests trooping in and out of his home incessantly.

Tokunbo says she’s an optimist who is very particular about the aesthetics of things, and that’s why she always looks around for a house with sparkling white interiors. Eddie says he hasn’t particularly settled on what personality he will inhibit. That he just likes things women will be attracted to. That they’re “good for business”.

They ask me the setting of my own interior and what it says about me. How do I explain to these people that I’m just a start-up lawyer whose place of habitation doesn’t exactly qualify as an “apartment” yet?